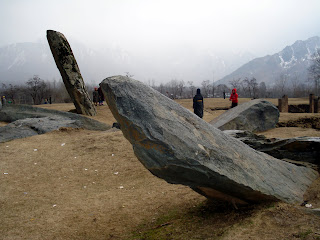 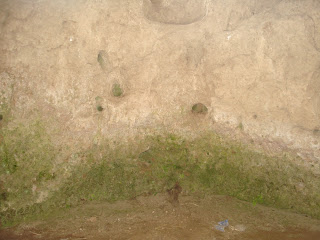 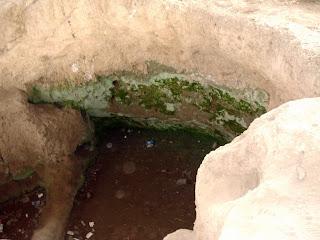 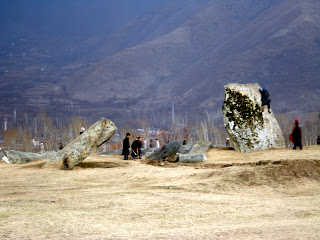 BURZAHOM usually called as Burzahama was the first Neolithic site to be discovered in Kashmir. It is located on a Plateau between the banks of the Dal Lake and the Zabarvan hills, about 5 km from the famous Mughal garden of Shalimar. After the discovery and excavation of Burzahama, other Neolithic sites were discovered in Kashmir at places such as Begagund, Brah, Gofkral, Hariparigom, Jayadevi-udar, Olichibag, Pampore, Panzogom, Sombur, Thajiwor and Waztal, all located on Plateaus mainly in the south-east parts of the Kashmir valley.
Burzahom translates as 'place [hom] of birch [burza]' in Kashmiri. Burnt birch found in the excavations showed that birch trees must have been common in the area in the Stone Age. Plentiful food from the forests on the Himalayan foothills, an abundant water supply from the lake, and a raised location protected from seasonal inundation ensured that the Burzahama plateau remained continuously settled from the New Stone Age to the Early Historical period.
Neolithic [New Stone Age] Phase I c.3000 B.C.

The earliest Neolithic homes at Burzahama were pits dug below ground level using stone tools. The sides of the pits were plastered with mud. These pits must have provided the early Neolithic people of Burzahama protection from the elements during bitter winters in Kashmir .The pits were usually round or oval, and narrow at the top and wide at the base. Holes discovered around the pits were probably used to fix wooden poles to give support to roofs made out of tree branches. Some of the deeper pits had a few steps leading down while the pit-dwellers people would have stepped down into the shallower ones.

The early Neolithic people of Burzahama made simple gray or reddish-brown hand-made pots in different shapes and sizes. They also made polished stone tools and tools out of animal bones and antlers. The bone tools included harpoons for fishing, needles for sewing, and arrow-heads, spear-heads and daggers for hunting. Ash, charcoal and pieces of pottery were found in the pits. Some of the pits had stone or clay ovens and a grinding-stone was found in one pit. The early phase I of the Neolithic at Burzahama did not yield any burial sites.

During this phase, the Neolithic people of Burzahama started to live in mud huts at ground level. The pits were filled up and plastered with mud and sometimes covered with a thin coat of red ochre to serve as a floor. Stone and bone tools with a better finish compared to the earlier ones were discovered. The pottery was generally hand-made shiny black pottery. A red wheel-made pot filled with 950 beautiful beads made of semi-precious stones was discovered at the site.

Many burials of this phase were discovered, usually under house floors or in the compounds. Red ochre was smeared on the bodies before burial. Apart from human burials, animals were sometimes buried along with humans or in separate graves. The buried animals included wild animals like wolves, ibex and antlered deer and domesticated animals like dogs, sheep and goats.

Scientists have identified seeds of wild and cultivated types of wheat, barley and lentils of different kinds found at Neolithic levels of Burzahama.

The Megalithic period is associated with the setting up of menhirs or single standing stones, which can still be seen in Burzahama. The pottery was fine-to-medium red-ware mostly made on the potter's wheel. Bone and stone tools were gradually discarded in favour of copper tools. Rubble structures of this Period have also been found.

Mud-brick structures at the site reveal that the site was occupied up to the early historical period. The pottery was fine-to-medium red-ware mostly made on the potter's wheel. Iron objects have been found belonging to this period.
Posted by O2 Adventure at 10:41 AM